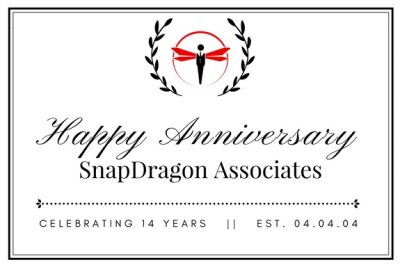 SNAPDRAGON ASSOCIATES – WHERE DID THAT NAME COME FROM?

Each year for our anniversary, we like to share the story of how SnapDragon came to be…In 2004, I was laid off from my role as National Sales Manager with a company supplying store protection products. It was the first time in my career that I had been fired, although my boss explained it was a lay off affecting 10 others and that I could take comfort knowing it had nothing to do with my performance. Nothing to do with performance? You just fired your top producer, what was this guy smoking? No, it did not make me feel better and I vowed that day driving home that I would never be in the position again to be putting literally millions in other people’s pockets only to be “laid off” or dismissed because some accountant showed an owner a bigger profit from the dismantling of his team. I would start my own team, but what would I do?

The next week, my wife Sue and I were at Disney world having dinner with our four kids and knowing that they were all a bit panicked about Dad’s “layoff,” I announced the start of a new company. A new company – “what are you going to do?” they inquired. “I have no idea but we are going to dream up a great name for the company right here in Disney!” I replied. I wanted a name that would be remembered and that people would instantly recognize with us and what we do. I did not know if I would open a lumber company, a wholesale yard, or a private sales organization, but sure as shoot, we were going to come up with a name. The name had to look good on a sign, a business card, a truck, etc. I wanted it to be fun and kind of make light of what we do. I used Monster as an example (no idea I was going to recruit) because it exemplified my point. It was a fun name, they used imaginary characters as spokespeople and while it had nothing to do with job hunting, everyone knew the name and what they did. My background was in lumber and I had always liked the name of my former boss’ boat Sequoia. My daughter Cassie suggested Sequoia6 to us as it took the name and added 6 because we were a family of 6. We all kind of liked that but wanted a backup. I explained that I had the word Dragon popping into my head and thought Dragon was a cool thing to consider. My wife said, “what about SnapDragon?” We all laughed and said that will never work but good try.

Long story short, when I got back to NH and met with my marketing friend, she reviewed our name suggestions and came back with a report that SnapDragon was easy to remember, and it “googled well.” Now after 14 years and embarking on our 15th, the name has become recognized for the work we do in support of the LBM’s Best-In-Class companies. We have grown from 2 people to 18 employees and business could not be better. We are continuing to expand our business, adding talent to our team, and our staff excels at identifying and recruiting the top professionals in our industry. We are producing great results for our clients and the SnapDragon name is recognized for our dedication to the industry. We would like to thank our clients, candidates, and supporters as we celebrate SnapDragon Associate’s 14th anniversary of providing Best-In-Class results across the Nation. Happy Anniversary!